Home » “The idea behind AGORA is to bring something new to the city.”
Interviews

“The idea behind AGORA is to bring something new to the city.”

Bass music has a strong foundation in Groningen being the (former) home town of many artists like Noisia, Fre4knc, Posij, Tom Wilcox, Former, Yorobi, Ordure and many others. The city has also seen numerous events run by crews like Submerge, Subsonic, Machtig, Noisia Invites, Break-Fast and Bassface. Some of them are still running nowadays.

In September 2019 Mailo Baks started the bass music event AGORA aiming to add to that foundation and with the ambition to have a big impact on the (local) scene in the long run. Saturday, February 1st she hosts the 2nd edition of her event in ‘De Loods’ so it was high time for us to learn more about her and her awesome event. Let’s go!

So Mailo, how did the idea for starting the AGORA concept come about and what’s the idea behind these events?
When I moved to Groningen in 2012, it finally gave me the opportunity to visit drum and bass parties, mostly at the notorious nightclub Subsonic (rip) and at Poppodium Simplon. After a couple of years, I found myself working as a bartender at both of those places.

While I was working at Sub, my interest in event organising sparked and my former boss Merlijn gave me the chance to host a small event called ‘Level Up!’. Sadly, the venue closed her doors in the summer of 2017, which meant that an important club for drum and bass was now gone, as well as a place where local talent could develop their skills. By that time I just knew I wanted to set up an event in Groningen one day.

I moved to Amersfoort first and I got to work for LBC Events. Because of that experience in combination with a pretty sick network which I built up over the years, I felt more confident about doing this. When I moved back to Groningen in January 2019 it was a bit of a ‘now or never’ situation. I chose the option ‘now’ and here we are!

The idea behind AGORA is to bring something new to the city. To offer multiple bass related genres, to give upcoming artists the chance to show their talent and to create a new place for local talent to develop their DJ’ing skills.

What’s also important is that it’s a place where our visitors can discover new music, new genres, new artists (which they’ve hopefully never seen before) and where they can meet new people. You might have noticed that all of our communication is in English. This is because of the huge amount of internationals in Groningen. They are an important part of the Groninger culture, so I hope to be able to reach them as well because I want them to feel just as welcome as everyone else.

‘AGORA’ sounds really nice to me, where does it come from though?
Well, it all started with a holiday in Greece. I found it such a beautiful place and I hope to be able to visit the country again in the future. That’s why my nickname/gamertag had to have something Greek in it, so it became ‘Meraki Baxx’. (Meraki means something really beautiful in Greek, you should google it.)

When I had to think of a name for the event, it obviously had to be a Greek word as well. It actually took me quite a while to find the perfect name, but eventually, I chose the name AGORA. The literal meaning of this word is ‘gathering place’ or ‘assembly’.

Is it only you who runs the night or are there more people involved?
I’m the one who runs and organises the event. I’m doing all of the communication, e.g. with the venue, our designer Tom Jager (he’s a f*cking legend), the photographers, videographers and so on. I also take care of bookings, marketing and social media and on the night itself I’m in charge.

But in all honesty, I wouldn’t have been able to do all this without the help of my friends and all of the other people involved. They definitely deserve the credits! Many of them helped me out financially and they are helping me out one way or another. For example, some of them are volunteering at the event or they’re driving all the way to Schiphol to get the artists to Groningen and back, others are hyping the shit out of this event and are dragging all of their friends to the party.

I actually still can’t believe that people are being so helpful. They’re unbelievably supportive and I can’t thank them enough for making all of this possible.

So this February 1st you’re throwing the 2nd edition, but let’s look back for a second: how was the first one?
The first one was pretty lit, to be honest! The line-up was very diverse, the artists were great, the crowd was super happy and the vibe was really good. For me, it was pretty exciting since it was my first time, but overall it went pretty smooth.

There was one thing that went wrong though. My BFF Stefan was in charge of the money. He gave me some of it to pay Terrence & Phillip with, but when I wanted to give it to them, they told me that Stefan had already paid them. Apparently, Stefan was so drunk that he forgot about this little detail. We’ve got it all sorted out in the end though, but I just needed to share this with y’all.

For AGORA II you’ve been able to put together a pretty diverse line-up and it includes 3 artists that have never ever played in Holland before. What’s in store for the heads who are visiting the night?
That’s an interesting question. I think they’re in for an epic night full of different genres and many surprises. The evening starts off with UK garage and this genre is hard to find in Groningen, which already makes it a special opening set. Next up, we move on to dubstep and bass house and after that the drum and bass kicks in.

I really need to mention the fact that we’re hosting the first official power liquid set ever in drum and bass history, so that’s something you don’t want to miss out on (haha) Furthermore, we’ll be having AC fucking 13 hindabuilding. AC13! I still don’t believe it myself, but it’s really happening.

Last but not least you can expect some jump-up Portuguese style and of course some banging neurofunk to close off the night within traditional Groningenstyle. 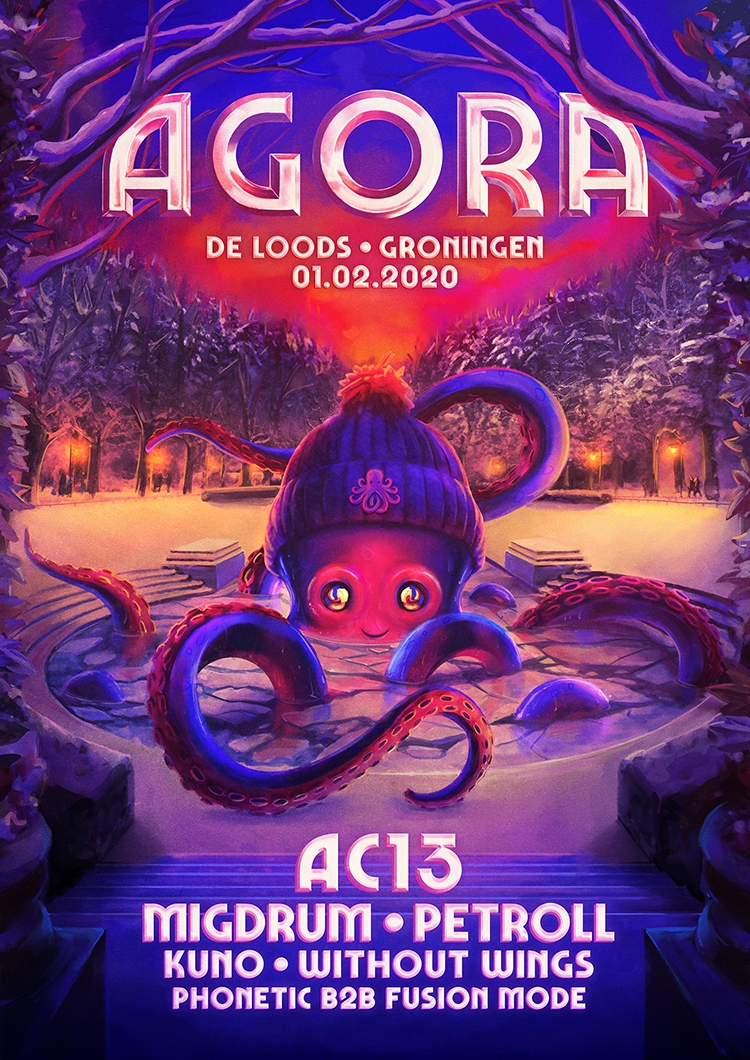 Btw, is that something you’re specifically aiming for as well, introducing upcoming bass music artists to the Dutch scene?
It is indeed! One of my main goals is to deliver something special and something new to the visitors, but at the same time, we want to give artists the chance to do their thing in a place where they’ve never been before. That’s why I think it’s so awesome to put fresh names on the lineup.

For instance, for the first edition, we booked Terrence & Phillip from Australia and Yue from Amsterdam. They never played here before, so I thought it would be nice for them as well as for the crowd to put them on the line-up. A lot of people didn’t know them yet, but the audience really liked their sets, so in that way, it’s good for both parties. I hope I’ll be able to do this lots of times!

How about the venue, you’ve moved to ‘De Loods’ which is quite new, isn’t it?
Yeah, it’s a new venue just outside the inner city of Groningen. The name obviously gives it away: it’s a hangar, wow!

The owner is called Ortrun and he’s the brother of Merlijn (my former Subsonic boss), so that’s how we got in contact. It’s a nice and spacious venue with a sick sound system and on top of that, there’s an Asian Garden at the back of the building.

Just thinking out loud here: maybe we can do a summer edition there in the future with a BBQ or a pool party or something.. That would be specifically vibey.

Can you tell us a tiny bit about next events already?
No, because it mostly depends on how the second edition goes. The only thing I can say now is that I would love to keep going!

Name 3 artists you’d love to see on one of your future events.
Well, I already have some options for my fictional future events, but I don’t want to spoil my line-ups already, so I’ll just give you some other names that I would love to have at AGORA. First of all, I think it would be great to have Andromedik on stage. I’m his biggest groupie, so that just needs to happen.

Secondly, I’d go for Calyx & TeeBee, because they are my all-time favourites. Third of all (and this is probably never going to happen) I would love to book DJ Marky. He’s such a legend mate, the best set I’ve ever experienced was his set at Korsakov 2018. If I could get him to Groningen, that would be another dream coming true.

Thank you for your time and big ups for putting in the work organizing all these nights. Any last words?
Thanks so much for this interview and thanks for your interest in AGORA. I’m really thankful that you wanted to do this!

For more details about the upcoming event check the party agenda or the Facebook event.